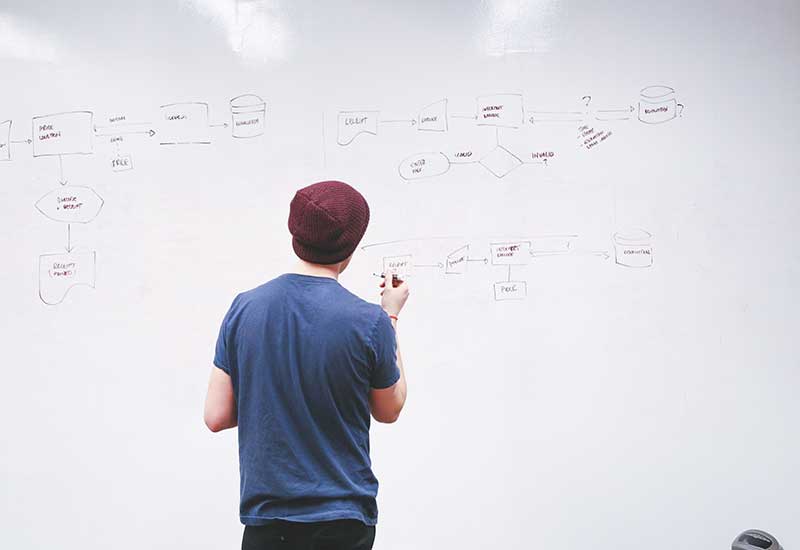 When it comes to innovation, are you a helicopter or a vending machine? One takes a holistic view, the other churns out tired ideas day in, day out. Iain Hopkins uncovers some tips to ensure your workplace is bursting with brilliant ideas.

The aroma of play-doh can send even the most seasoned adult back to childhood. Few would question the origins of the ever-popular art and craft modelling compound. Surely it was intended for kids? Not exactly. In the 1930s, the product was first developed as wallpaper cleaner – it would literally clean grime off wallpaper. A random dinner party conversation in the 1950s, about how a kindergarten teacher had started using the compound as a craft tool, set the wheels in motion for a total transformation of a product whose sales had recently started to wane.  The product was reworked and marketed to Cincinnati schools in the mid-1950s. Play-Doh was demonstrated at an educational convention in 1956 and prominent department stores opened retail accounts. The rest, as they say, is history.

It’s just one example of innovation in business – of grasping an idea and running with it; of using a challenge of significant change – waning sales in this case – to foster innovation.

When it comes to innovation it’s important to recognise that all people can be creative and therefore innovative – but there’s a catch. Dr George Land, a pioneer in the field of creativity and innovation, has conducted studies indicating that as we go through life, and especially our careers, we use our creativity less. Nigel Collin, author of Herding Monkeys and CEO of Thinkativity, outlines what Land did: “He gave a bunch of kids a creativity test, then gave it to them again five years leer, and again five years later, and then to adults. Each time he did the test the results dropped considerably. It doesn’t mean we become less creative; we simply use it less.”

Collin has found some people who are a lot more creative than they give themselves credit for, and more importantly, they’re more creative than other people give them credit for – and this has huge implications for his business. “If we don’t nurture or encourage the creativity of our workers, we’re not going to get the ideas to fuel innovation,” he says. “It’s a matter of unlocking that potential.”

A different way of thinking

An analogy works best when considering how most people think in business. To generalise, people either think like helicopters, or they think like vending machines. Those who think like helicopters see things from a distance; they obtain a holistic point of view. But they can also fly around and look at multiple angles, or fly in close and look at the detail and then fly back out again. Because they have the ability to see the world from a different point of view, they come up with more possibilities; they can see more alternatives. Then there are those who think like vending machines: the coin goes in the slot; the button is pushed, and out the bottom comes out the same old idea, maybe wrapped in a slightly different way. This latter approach is dangerous, says Collin. “We’re all busy, no one has time, but if we go ‘yes that’ll do’, and don’t come up with different ideas it’s not going to be conductive to innovation.”

There are three keys to unlocking innovation in people: permission, environment and progress.

Permission is critical. If people in an organisation don’t feel safe to put an idea on the table without the ridicule or fear of failure or negative ramifications, they’re not going to. As Collin says, the truth is most people in the workplace don’t feel they have permission to think differently, to think outside the square, to push the parameters. “Unless people are clear about not wanting vending machines but rather helicopter ideas, people will play it safe, or they will provide ideas they think you want to hear.”

An organisation therefore needs to create a culture or a policy that gives people permission to come up with radical ideas, and to fail. “That’s when you’ll find the disruptive ones, and that’s what you’re after,” says Collin.

The second, environment, have two facets to it: the physical environment and the workplace environment – perhaps best described as the ‘mental environment’. “This is where we look at mechanisms that allow people to think differently and outside the square,” says Collin.

Collin maintains this is more than just the physical environment, although that’s very important – this is why so many organisations have ‘thinking spaces’; it’s also why artists have studios. “If you’re stuck for an idea one thing to do is get out of your space and change your environment – you’ll find you’re stimulated.”

It also includes time. Ideas never strike when you need them to; they don’t work 9-5 and may strike when least expected. Therefore it’s important to put mechanisms in place to give people time to be creative. “I’m stunned at the number of organisations that don’t allow their people thinking time. Just 20-30 minutes a day to sit and think. There’s a perception that unless were doing, doing, doing, we’re not being productive,” Collin says.

Another environmental element is collaboration. Collin explains: “A collaborative environment is incredibly important because if you’re going to think like a helicopter and come up with different ideas, one of the easiest ways to do that is to tap into the perspectives of other people, because everyone thinks differently. You must create a culture where it’s ok to collaborate. Not just internally with a team, but with other teams as well. You’ll find if the marketing team just collaborates with the marketing team they’re always going to come up with marketing-based ideas. They should be collaborating with the warehouse e or even with industries outside their own.”

There also needs to be an environment of risk-taking. This does not mean financial risk but rather creative or innovative risk, which comes back to the permission piece: you want people to take creative risks with their ideas. Every success story has gone through a series of failures. The classic example is Edison, who, depending on what source is believed, went through 1,000 or 10,000 failures before developing the electric light bulb. Every time he failed, he learnt what not to do. “We discover things we never would discover – that’s how a lot of ideas have been born,” says Collin.

The third key to unlocking innovation is process. It’s critical to have the right processes in place to create ideas and to act on those ideas. In most companies, Collin notes, this is handled in an ad hoc manner – people sit in a room, a problem is outlined, a call for ideas is made. Collin advocates this process in which people can consistently generate ideas and then direct those ideas towards an end goal.

“The easiest way is to think of a funnel. At the top of the funnel you’ve got your challenge or your opportunity – you pour all your ideas at the top and then at the bottom you’ve got a filtering mechanism. This is where you need to decide which ideas are good and which aren’t so good. It allows you to separate the evaluating and judging of an idea from the creation of an idea.”

A common mistake is to judge an idea as soon as it’s born; it gets squashed before it has time to evolve or breathe.  A process helps firstly to clarify the problem; it ensures you’re clear on what it is you want and need ideas for. Secondly, a brainstorming or a blue-sky (or however it’s branded) session will get the creative juices flowing to generate ideas. And finally, it’s necessary to evaluate and judge them.

Throughout that process it’s necessary to have a process leader, someone who the buck stops at. That person, the project manager or similar, needs to allow his/her team to let ideas flourish, and then to evaluate ideas. Evaluation requires producing an initial shortlist of 20-30 ideas from the 100 or however many are produced whilst brainstorming.  From there, the top three that meet the most criteria should be selecting. Which is the most practical? The more viable? Following this is the testing phase of an idea. Collin elaborates: “this is where you start picking it apart – undertaking the financial analytics, identifying the fatal flaws of an idea, pulling it apart. You interrogate an idea. That must come when you’ve whittled your list down to a shortlist, otherwise you’ll be evaluating in detail 100 ideas, which will never happen and as a result nothing gets done.”

Where does HR sit?

The second piece is the retention and attraction of the right mix of thinkers. There are different types of creating people. There are different types of creative people. There are those who are great at thinking; they come up with the ideas; however they’re not great at implementing them. Then there are those who are not great at thinking up ideas but great at implementing. Then there are others who appear not to be doing anything at all. They sit in the brainstorm and don’t say much, but at the end of the session they come up with an idea that no one saw. Collin says this group is often overlooked when teams are being established. “We go for thinkers or the implementers – the observers in your team are missing a great opportunity. They’re like the helicopter in many ways.”

Likewise, Collin says, some people are very analytical thinkers – Six Sigma-ish in their approach, good at getting an idea and pulling it apart. They are very necessary but so are the dreamers. “The dreamers often don’t analyse things much, and they may not be good at doing stuff – but they’re excellent at finding unbelievable solutions. It’s important for HR to understand that dynamic, and to help other people understand that dynamic,” Collin says.

And finally, HR plays a key role in clarifying what innovation means. Most people jump into the conclusion that innovation is radical and ‘big-bang’ – the things that change the world; others believe it’s incremental – a small change that may lead to bigger things. HR can help to simplify and clarify this creative-innovation argument.

Ultimately, creativity is about ideas; innovation is the implementation of ideas. When that connection is made, it’s easier for people to participate. “To say we’ll do some training and development about innovation – it’s all too hard. But if it’s just about ideas it’s a lot easier for the worker in the warehouse to grasp,” Collin suggests.

Contrary to how most people perceive innovation, it’s not something that stalls when times get tough. In fact, quite the opposite can happen. Times of great change, such as now and the preceding five years can be the catalyst for innovation to occur. Collin says the ‘batten down the hatches, concentrate solely on what it takes to keep a business alive’ mentality during periods of change is very necessary. Yet if business leaders are just running the ship and ensuring the t’s are crossed, it’s likely they’re missing out on opportunities; they’re not searching for the next disruptive idea.

“When that happens during change different opportunities open up,” Collin says. He cites Hollywood in 1927, on the cusp of the sound era in movies – an incredible disruptive event that most studios were unprepared for. Studios were not soundproof; many actors could not speak English. If you didn’t adapt – and quickly – you were left behind. Walt Disney was different; he saw opportunity. He made the first synchronised sound cartoon. “That type of innovation came from a disruptive time of change,” says Collin. “It’s the difference between reacting and responding – it doesn’t mean getting rid of what you do, it just means looking at what else is possible.”